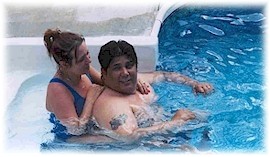 Some types of bacteria and fungus found in the soil can actually penetrate through a vinyl liner and cause stains to appear on the liner. Usually they will start off as spotted or cloud-like formations on the liner. Algaecides used in the pool water have little if any effect on the stains caused from bacteria, since it doesn’t get to the source of the bacteria in the soil. If a pool is known to have a problem with bacteria staining the liner, the ground underneath the liner may be treated with a solution of one half household chlorine bleach and one half water. Mix the bleach in the water and mist the floor of the pool with a small garden sprayer three or four times prior to dropping the new liner in the pool. After the last application of bleach solution, wait several hours before dropping the liner; making sure the solution has been absorbed into the ground.

If the liner has been recently replaced, one method which has been used several times is the use of Copper Iron Sulfate (FeSO4) to change the pH of the soil around the pool, therefore killing off the source of the bacteria or fungus. This is not a guaranteed cure in all cases but in the last few years it has had some astonishing results for some of our customers. Best of all, this can be tried without having to drain the pool and replace the liner! Copperas Iron Sulfate is a chemical used by tree nurseries for treating the pH of soil for some iron deficiencies in plants. For an average size pool, say an 18 x 36 rectangle, you need about twelve to fifteen pounds of this powered chemical. Sprinkle it on the ground next to the pool deck on as many sides of the pool as possible. Then turn a lawn sprinkler on the ground for two or three days, long enough to get the ground around the pool thoroughly saturated with water. The idea is to get the powder to soak deep into the ground so it can change the pH of the soil and hopefully kill off the source of the bacteria. Usually results are not seen for a week or two since it has to get deep in the ground to have any effect on the bacteria. The Copper Iron Sulfate has not been known to have any harsh effects on grass and care should be taken when using around delicate flowers.

We are ready to assist you seven days a week.

Add Accessories to Your New Pool! 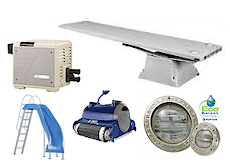 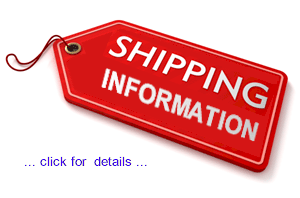 Yes, You Can Do It Yourself!

Click HERE for do it yourself above ground swimming pool installations.